After a third straight quarter of falling rail shipments, Omaha-based Union Pacific Corp. said Thursday it continues to keep a sharp eye on expenses and payrolls.

Chief Executive Lance Fritz told The World-Herald the company is being “constantly diligent” in reviewing the people and assets it employs to haul finished goods and raw materials on its 32,000 miles of track in the western United States. The company, the nation’s second-largest freight railroad, employs about 8,000 Nebraskans.

“We are concerned about the U.S. economy,” Fritz said, speaking after Union Pacific reported third-quarter freight volumes that fell 6 percent and profit that dropped 5 percent. “Consumers are saying they are optimistic and buying new vehicles like they are optimistic, but we don’t see it showing up in retail sales.”

Worries about the economy translate into worries about Union Pacific, which ships the stuff the world manufactures and consumes, from beer to lumber.

Quarterly freight volumes have fallen for three straight quarters, the first such run since late 2012 and early 2013. The company this year has placed 2,700 union workers on temporary layoff and has said it plans to eliminate several hundred management jobs. It also will likely cut 2016 capital spending.

“We still have some work left to do,” said Union Pacific Vice President of Operations Cameron Scott, speaking of controlling costs on a conference call Thursday with investors and analysts. 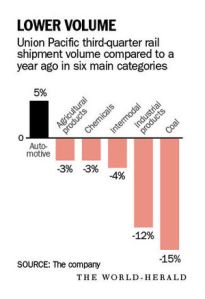 Concern is mounting because Union Pacific on Thursday reported that third-quarter net income fell to $1.3 billion, or $1.50 a share, from $1.37 billion, or $1.53 a share, a year earlier. The earnings per share beat the average Wall Street analyst estimate of $1.43. Revenue dropped 10 percent to $5.6 billion.

Despite the worry on declining shipments, investors rushed into Union Pacific stock on Thursday. Shares of Union Pacific rose 3.85 percent on the day, or $3.60, to close at $97.01 each on the New York Stock Exchange. The shares had fallen around 18 percent so far this year through Wednesday, the day before the third-quarter earnings were released.

Shipments of vehicles and vehicle parts were the only bright spot, rising 5 percent. Volume in ag products and chemicals, such as fertilizer, declined 3 percent. Intermodal shipments, or those traveling by ship, rail and truck, dropped 4 percent. Coal volumes led the shipment declines, down 15 percent in the quarter, as U.S. utilities increasingly shift to cheaper natural gas. Shipments of industrial products such as lumber were down 12 percent.

“The housing market is showing weakness again, and is always bad news for shipments of raw materials and lumber,” said Joseph Schwieterman, a transportation professor at DePaul University in Chicago.

Crude oil volumes tumbled 40 percent as persistently low petroleum prices put a damper on production from the fields in the northern regions of the country not well-served by pipelines.

Union Pacific said Thursday that about 2,700 hourly workers on trains, engines and yards are on temporary layoff, up from 2,300 in September and 900 early in the year. Almost 1,000 locomotives have been placed in storage, up about 140 units from the second quarter. Overall, the company employs about 48,000 people.

“This is about what I expected,” said Logan Purk, a transportation industry analyst at wealth adviser Edward Jones. “Tough sales and volume numbers, but solid cost control.”

Purk said “sluggish” U.S. growth makes it unlikely Union Pacific or any of the other six Class I railroads will be amping up hiring and revving up mothballed locomotives anytime soon.

“They will continue to realign assets, whether that’s storing more locomotives or furloughing employees,” Purk said. “As long as volumes keep trending the way they are, this will continue to be the case.”

Union Pacific, which trails only rival BNSF Railway in ton-miles, said the negative trends are darkening the outlook for capital spending and profits. The company is unlikely to match last year’s record earnings per share of $5.75 and this year’s record capital spending budget of $4.2 billion, Chief Financial Officer Rob Knight said on the conference call.

“From an absolute-dollar perspective, we expect it to be somewhat less,” Knight said of the capital budget.

CEO Fritz told analysts and investors he expects Congress will vote to extend the deadline on when railroads must be compliant with an automated train control system that can prevent some accidents using track sensors and remote controls. None of the railroads are close to meeting the 2015 deadline, and regulators have threatened fines starting next year.

If no relief comes, Fritz said Union Pacific will have no choice but to stop taking some cargoes, such as chlorine used to purify drinking water. He would also expect interruptions of passenger service on the rail systems that use Union Pacific rails in major metro areas such as Chicago, where 300,000 commuters take the train to work.