Thats great….but as sure as the sun will rise tomorrow, they will claim poverty on our next round of bargaining.

Robber Baron – A term applied to a businessman in the 19th century who engaged in unethical and monopolistic practices, wielded widespread political influence, and amassed enormous wealth. 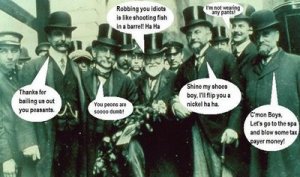 “Union Pacific achieved record quarterly financial results, leveraging the strengths of our diverse franchise to handle strong volume growth,” said Jack Koraleski, Union Pacific chief executive officer. “As we continue to focus on improving our service, we are encouraged by the accomplishments we achieved in the quarter, including a two and a half point improvement in our Operating Ratio to a record 62.3 percent.”

“We are optimistic about the remainder of the year,” Koraleski said. “Assuming the economy and weather cooperate, we are well positioned to finish up the year with record results. We continue to see tremendous opportunity across our diverse franchise and remain focused on improving our network velocity and fluidity so that we can leverage these opportunities by safely providing our customers with excellent service and our shareholders with strong returns.”

Union Pacific Railroad is the principal operating company of Union Pacific Corporation (NYSE: UNP). One of America’s most recognized companies, Union Pacific Railroad connects 23 states in the western two-thirds of the country by rail, providing a critical link in the global supply chain. From 2004-2013, Union Pacific invested approximately $30 billion in its network and operations to support America’s transportation infrastructure. The railroad’s diversified business mix includes Agricultural Products, Automotive, Chemicals, Coal, Industrial Products and Intermodal. Union Pacific serves many of the fastest-growing U.S. population centers, operates from all major West Coast and Gulf Coast ports to eastern gateways, connects with Canada’s rail systems and is the only railroad serving all six major Mexico gateways. Union Pacific provides value to its roughly 10,000 customers by delivering products in a safe, reliable, fuel-efficient and environmentally responsible manner.